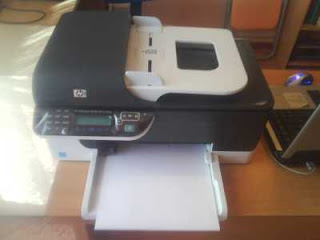 I had an Epson Stylus CX3200 called Inky which stopped working on the 12th of November in the afternoon after 7 years of real hard work. It's unbelievable how well it worked and never had to be fixed in any way although lately it sounded as if there was something broken inside but it still printed in high quality until the end. This post is more than an introduction to the new piece of hardware a loving homage of Inky my beloved printer.

In the meantime I borrowed my uncle's HP psc 1315. It does not have the same quality as Inky but it definitely convinced me to buy an HP. Why? It's real simple. HP has excellent Linux drivers!!! What else can I say?

I'm exited about the new purchase. It has a good scanning and printing quality and exellent drivers for Linux. I had hplip installed (hp linux imaging and printing v. 2.8.6) and I used HP toolbox gui to configure it properly. I have been trying it for two days now and I'm happy about the results even though I know it's difficult to foresee its performance in the long run. Will it beat Inky's seven years of service? I have my doubts but I hope so ...

Now inkfly is the default printer. It prints from the gui and also perfectly from the cli using the lpr command.
Posted by chals at 11:27 PM