I have not really written very much about sdf-eu yet. As far as I can remember there is just one post named sdf-eu and a couple of posts named sdf.
Well, probably the reason why I have not written much about it is that I spend a lot of time at it.
It is true. I log into my shell account at sdf-eu every single day. The reasons for doing that are countless and if you want to know more about it you will definitely have to visit sdfeu.org, make an account and see for yourself.
All I can say is that having a shell account at sdf-eu is a fantastic thing to have.
What I do there everyday:
The list of things that you can do is not limited to the few examples I have just included here. There are many more things that you can do but it is very difficult to explain it to someone who can not even imagine what this is all about.
I sometimes like to think of sdf-eu as an interactive shared server, but again if you can read my enthusiasm from between the lines you will realize that, even again, it is much more than that. It is like a family :-)
<3 u all guys :-p
Posted by chals at 8:22 PM

Today I managed to solve this awesome cube my sister and nephew gave me as a present. It was a real challenge but I succeeded :-p 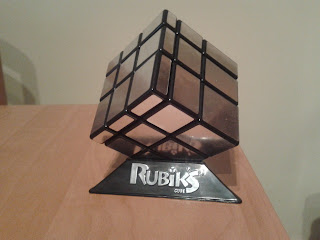 Yesterday I ordered my first Raspberry Pi. I say my first because ever since I discovered this cute little invention I said I'd (and I intend to) buy two. But for the time being, and also with the idea in mind of running some tests to see how it works and how many things I can do with it, I just bought one.
It is going to be powered by debian. I read there is a debian derivative called Raspbian which was especially designed to work with the RasPi. So I'll have to give it a try. Besides it is the recommended operating system by the Raspberry Pi Foundation.
But to tell you the truth, even though Raspbian might be ok to begin with, I will replace it by a pure debian installation. I do not need the graphical interface provided by Raspbian. I just need a basic debian system with some servers installed.
I intend to use the little RasPi as a micro server of several things, gopher, http, an irc bouncer... but who knows? I still need to see how far one can get with such a tiny machine. To begin with its low power consumption makes it ideal to run 24/7.
The downside is that it costs a little bit more than expected (even though this should be expected) It costs 27€ but once you have paid for the case, the power supply and the expenses you need to spend 52€ (more than that if you have to buy some extra stuff like cables, memory card...) but well, I think it is worth it. The worst thing is having to wait for 13 weeks until the order is processed plus one more week (own estimation) to arrive home.
Note: I'll publish some pictures when I finally get it.
Posted by chals at 3:02 PM