Some years ago I showed you my collection of penguins of Madagascar.

Now here is, even if it is not finished,  my SpongeBob collection (Thanks to a very dear friend of mine)

So far we've got Mr. Krabs, SpongeBob and Squidward.
Posted by chals at 4:42 PM

I created my home network in 2005 when I bought Aelita. That was 6 years ago. I remember the first time that I could print from the laptop using samba. It was a great experience. Then came other network services: Telnet, ssh, ftp, vnc ... Wow!!! It's hard to recall them all.

But throughout these years I thought that my  machines were just that, a battery of hard workers performing a job. I had never had the feeling that every computer attached to my network was what they actually are: A perfect piece of the puzzle. Now I can clearly see that they have all become a powerful group of soldiers forming an army. After some time it does not matter what computer I'm sitting at. From one to another I can perform the same day to day tasks and retrieve any files or whatever I need. Especially since I installed the ftp server.

No need to say that the power of Debian GNU/Linux has helped me a lot. It provides all the necessary tools to build up such a wonderful home network as the one I'm so proud of.
Posted by chals at 8:55 PM

What do you say about these two pals??? 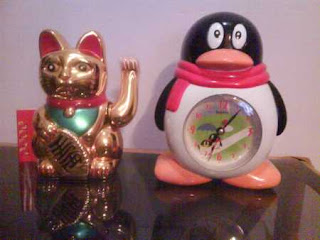 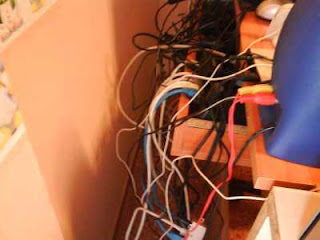 Yesterday I told you I was trying to install Debian GNU/Linux 6.0 codenamed Squeeze on my tiny toy eeepc 701. I couldn't, but late at night I saw a ray of hope when I downloaded a hybrid-iso image from http://live.debian.net/ The installer seemed to work just right but it was time to go to bed.

Today I have successfully installed Squeeze on the eeepc and it was a blast. Seriously, the installer was a breeze. Awesome work again of the d-i team.

The process is plain. I copied the hybrid-iso image to a usb pendrive:

Then I booted the eeepc from the usb pressing Esc at boot time and selecting the usb drive. I checked everything was working fine in live mode and finally launched the installer (There is an icon on the desktop so you only have to click it)
That's it!!!

My model of eeepc only has 4GB of disk space so I have removed some applications I do not use with it (openoffice) and installed some I do use (abiword) It's a fierce fight for space!!!

The ethernet and wifi interfaces work out of the box. Now I only have to configure a new connection to use my Alcatel X060 usb modem when I am not at home. Here you can see a screenshot of the desktop with dropbox already at work.

And here is a picture where you can see why I love my eeepc so much. I even use it as TV with kaffeine(Watching Code Lyoko lol). The only nuisance is that I have to copy the firmware of the dvb-t usb stick to /lib/firmware. But that is just once; I have written it down here just as a reminder for other occasions in case I have to reinstall.

Secondly let me tell you that all my machines are working hard as hell as usual. Santa brought me a 22 inches led screen (LG Flatron E2240) for Odd. I used the old 15 inches screen to substitute fhopper's CRT. Now they both look really gorgeous. But beauty is just in the eye of the beholder!!! I have assigned them some hard work as usual. I improved some of my scripts and there they go.

But the real deal is that I'm trying to install Squeeze in my eeepc 701. Nothing out of the ordinary it seems, but pay attention to the process:

First I used clonezilla-live-1.2.6-40-i686 to make a copy of the entire system just in case things go wrong.

Second I want to install Squeeze. I use a live debian system with installer. The debian-squeeze-live-beta2-i386-gnome-desktop.img installer does not work. So I have to think of an alternate method.

Third I can't upgrade in the usual way (apt-get dist-upgrade) because I'm out of disk space.

Finally I've downloaded a live version of the debian installer and see if it works. The instructions are here
I'll report success or failure.

UPDATE: Failure. Keep on trying.
UPDATE(Last minute): I have downloaded another Debian live version (A hybrid-iso. Last one was an .img) This time the installer seems to work perfectly but I'll wait until tomorrow to install it.
Posted by chals at 11:40 PM