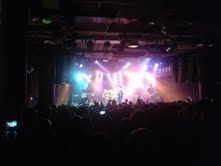 Gnome 3 is a complete redesign of the Gnome desktop environment. I have tried it using an Opensuse live CD and the experience was like wow, it really is something you need to get familiar with in order to get things done.

Some of the most outstanding features of Gnome 3 are:

-They have enhanced the use of traditional virtual desktops. Yes, virtual desktops have (almost) always been there, but not many people took advantage of them. Now, their use is a bit more automatized in the sense that windows are assigned to different spaces, grouping them to make the best use of your graphical environment.

-Minimize and maximize buttons have disapperared from windows. Only the close button remains there. At first it is a bit strange but later on you really enjoy the way windows resize automatically for fullscreen, half screen or floating around. It's great.

-There is no traditional menu. Clicking on Applications displays icons for all installed applications. It's something similar to having a million icons on the desktop only that it isn't.

I love clean pristine desktops, I do not like no icons there. What are they useful for anyway? Alt + F2 is the way to go.

Well, this is my initial overview of gnome 3. It is supposed to be included in testing soon. I'll have more time to test it and learn more things about its usage. I'll sure discover new strong points and flaws.
Posted by chals at 8:14 PM

The great misconception of the command line

I started using computers in high school in the 80's. Back to those days it was Dos or Nothing so typing commands at the terminal emulator came as a natural thing to me. In fact it was one of the reasons why I decided to adopt Debian as a sole operating system some years ago (Woody but just for 4 or 5 months till Sarge was released)

But make no mistake, most of the time I am a desktop user just like everybody else with a difference perhaps. I always have at least one terminal window open performing one of my everyday tasks: running one of my home-grown scripts or screen(+irssi) or wget or whatever. I just need to tell you that I'm hooked on centerim (formerly known as centericq) since Etch. I just can't do without them all.

Take screen for example. It has perhaps a hundred options and key bindings but the average user has more than enough with 8-10 of them. Besides most options are mnemonic like d = detach r = reattach p = previous n = next S = split ... So it is not complicated.

The shell is perhaps the most powerful tool for sysadmins but this is true for everyone alike: the more you use the command line the more you learn to appreciate it. I have written a bunch of scripts through the years but I am definitely not an expert. Anyway I like writing shell scripts a bit more everyday.

Let me quote from one of my bedside books: The linux command line by William E. Shotts, Jr.

There is though a really dangerous and sometimes evil command. It is:

I know I shouldn't use it as carelessly as I sometimes do, but it comes in handy on certain occasions.

Well, what else can I say? I have had some unwanted surprises. The only solution would be using this alias:

alias rm -r *='echo are you REALLY sure? Are you mad or something?'

(But unfortunately it is not possible to do it like this because you have to create aliases without blank spaces, too bad)

One final word: Follow my advice and use and enjoy the command line. In time you'll see it is worth it!!!
Posted by chals at 8:13 PM

I was in doubt because a friend of mine recommended blackberry for it is supposed to be best suited for email. No wonder because It has a real keyboard.

But the fact that android uses a linux kernel weighed way to much for me to resist. And finally here it is. This great android based mobile phone. 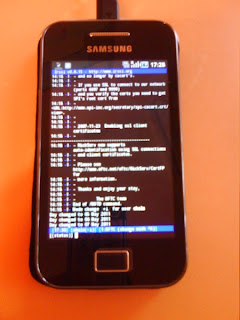 Well, to tell you the truth what makes this phone really outstanding are the applications you can install. I only needed two so it was fast:

1st.- Irssi ConnectBot a ssh client modified to use irssi (You can see it at work in the picture)

2nd.- AndFTP a FTP/SFTP client (To connect to my server)

I also configured the phone to use my email account and that's it. Now I can follow my motto of the month: "Always connected means always connected"

I suppose in time I'll end up installing a million apps like for example Dropbox and other utilities but I'm content by now. It can even make phone calls
Posted by chals at 8:04 PM

This week my "ugly face" anecdotically appears on the home page of linux.com

Here is the proof: 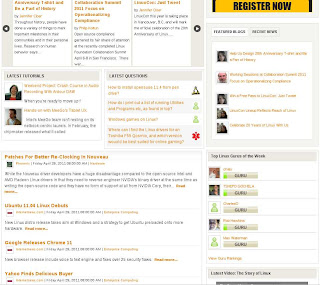 The story goes that I published a tutorial/article about how to create a debian live usb. The tutorial was first published on my website but since not many people visit my site I decided to send it there.

I can't write code but I sure can write documentation or at least I try to do it as accurately as I can.

Besides, sharing a little knowledge is good.
Posted by chals at 7:55 PM

This week I finally fulfilled one of my "easy-to-achieve" dreams of long ago which consisted in trying BeOS (discontinued since 2001) or almost.

The story goes back to 2004-2005 when I spent long hours reading and thus learning about operating systems. I read Neal Stephenson's In the beginning ... was the command line He enhances linux (of course) but makes a special praise of BeOS. I wanted to try it ever since then but unfortunately I never got the chance to do that.

On my quest for BeOS I heard about Haiku but at first I looked down on it as being a mere second hand imitation of the real thing. However now that I finally decided to try it I must admit how wrong I was. Haiku is a really good operating system. Nice and clean user interface focused on usability and simplicity but stuffed with a bunch of really useful and easy to use software. Besides it is free and open source and has a powerful terminal

You can download it in three formats: anyboot (images for usb devices), iso (for cd's) or VM (images for virtual machines). At the moment of writing this it is in alpha 2 state but I found it very stable. It woks great. I have not installed it on a hard disk but tried it with qemu and with a live cd as well.

This is part of a speech I wrote about computer freedom and free software. I think I read a similar comparison somewhere but I like to think that I made it all up by myself.

"Imagine you have recently bought a brand new bicycle for your little child (I find a little girl to be more heart-touching, that's why I refer to the child as "she"). She is very excited about the coming of spring because she'll be able to ride her shiny bike. On Sunday you're all ready to go to the park but then you find the bike has got a flat. No problem you say. I've got an old rusty pump in the garage, it's a just a matter of finding it. However when you are about to pump air into the wheel someone suddenly warns that you just can't do it because when you got the bicycle you signed a legal contract saying that you are not allowed to do that under any circumstances. You must take it to the technician who's the only person authorized to do that.

You will probably wonder: What? Why can't I?

Well, to a certain extent (and with several nuances) this is similar to what happens when you buy a computer with a legacy operating system. You own the machine because you have a ticket to prove that, but even if you have a ticket from the store for your legacy operating system you just can't say it is yours because in order to be able to use the software you are forced to accept certain terms that specifically say that you have the right to use the software but you just can't manipulate the source code to suit it to your own personal needs.

That's where free software comes in ...

Since I chose free software I chose freedom and now I can finally pump fresh air into my computer."
Posted by chals at 7:51 PM