Screenshot of the week 1

This weekend I have written a bunch of blog posts. (5? or more) but I didn't upload any screenshot so here is one. The posts dealt with several utilities I use on a daily basis (bluetile, gnome, irssi, elinks, ssh...) So I have taken a screenshot with several of those programs. There will probably be some more posts next week and I'll try to summarize them all in one or several screenshots. I hope you like them.

In this screenshot you can see three windows tiled using bluetile; there's bluetile's bar on the left. One of the windows shows my homepage as rendered by a command line browser named elinks. Another one my favourite ftp, sftp client filezilla. And last but not least irssi. In fact I've got irssi proxy running on that window. I connect to it using any other client like X-chat. Awesome isn't it? 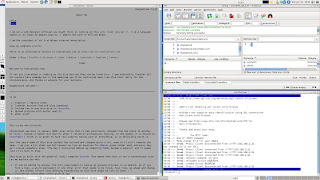