There is a saying in my village that goes: "Pa i crostó, l'esmorzar d'Altorricó." Which roughly translates as: "This is the traditional breakfast that people used to eat a long time ago, but not anymore." Well, things change over time. I doubt many people still continue the tradition of preparing pa i crostó for breakfast. I do sometimes. I really love to eat it, especially in the winter.
It is not really difficult to prepare, rather on the contrary, it is easy, but to tell you the truth the secret of a good pa i crostó preparation lies in the coordination of the steps. You want to eat it hot (if one of the ingredients, either the toast or the eggs gets cold, you will definitely not enjoy eating it.)
Since a picture is worth a million words, I took several pictures. 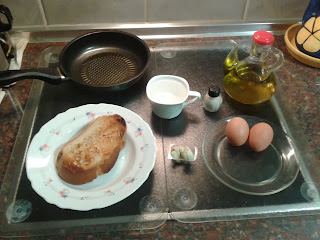 Heed that the coordination of the steps is crucial! You have been warned :p
Cut a thick slice of bread, the thickest the better. You will have to pour the boiling water over the toast but you still want it to keep part of its consistence. If the toast is too thin, it will turn into a mash. Then toast it.
Heat the water until it starts to boil.
Meanwhile rub the garlic over the toast, on both sides. The flavour and the taste of the garlic cloves is the key to success.
Put the frying pan with oil to heat.
Pour the boiling water over the toast until it is soft, add salt and olive oil. Then, immediately fry the eggs. When they are ready put the eggs on top of the toast.
Do you want my special recommendation? Eat with a spoon 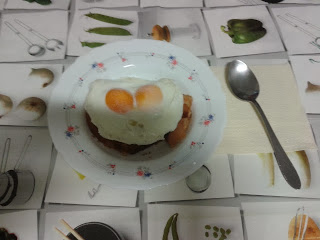 Screenshot of the week 7

A few days ago I wrote a tutorial on how to configure weechat's relay plugin through a single port for all servers. I published it on my phlog, so I'm not unnecessarily going to repeat the information here. The link is here in case you are interested: (Warning: gopher link!)
gopher://sdf-eu.org:70/1/users/chals/phlog/2013/./12-15-13
Since the relay is working so fine, I decided to take a screenshot of the weechat instance running 24/7 with the configured relay running in a remote server and the other one of my local instance running in my raspi.
Just in case somebody is wondering why I run two instances of the same program both locally and remotely, the answer is plain simple. In my local instance I can configure and use as many plugins and scripts as I like whereas things are not so easy on the remote server. For example the aspell plugin which is really handy when typing fast or the buffersscript, just to name a few. 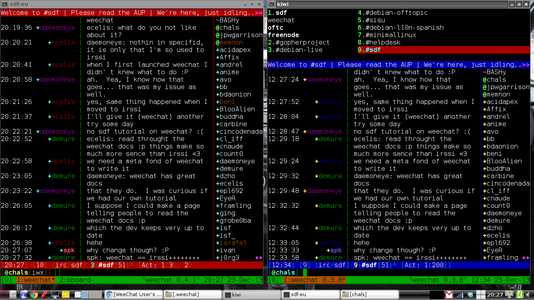 I have been procrastinating a bit about publishing version 3.0 because I wanted to do two things:
1.- Add functionality to choose the year of the archive, this would only be useful for people who are new to pharc but still, it would be a nice feature.
2.- Rewrite it in python, but unfortunately I'm still not proficient enough with python to do it (even though this is a simple script).
These things will have to wait for a later release someday :)
My initial idea was to publish one new release each year, i.e pharc1 saw the light in 2011, pharc2 in 2012, pharc3 in 2013 and so on and so forth, but to tell you the truth, gopher stuff is rather stagnant so I do not anticipate to see many changes in how things work form now on.
Anyway, the changelog for v.3.0 is:
You can find all pharc versions here (gopher link):
gopher://sdf-eu.org:70/1/users/chals/downloads
There is also a .deb package available here:
pharc 3.0-1 all.deb
And as usual, the git repository is hosted at gitorious:
pharc git repo


The wiki is located here:
pharc wiki
Posted by chals at 7:02 PM

Screenshot of the week 6

This is a tiny screenshot of a corner of my sid desktop. It was taken with scrot -s to select a region.
The story behind these "weird" icons is as follows:
In order to create those icons I browsed to the Desktop directory with pcmanfm then right click on the mouse and select Create New/Shortcut.

It has been a really, really long time since I used weechat for the last time but now I'm back and I don't anticipate to look back again.
My first irc attempt was with a web-based client (possibly mibbit) Then, when I started irc'ing seriously I started using irssi (inside screen). After that, a friend of mine recommended me weechat (inside tmux). I liked both combinations, but I soon went back to the good old duo irssi and screen. Why? Well, I really made an intensive use of the irssi proxy plugin. With it I could connect to the same core from different clients and different locations. It was very handy for me. (I know that weechat also has a relay plugin but I never bothered configuring it)
Now I really do not use the proxy. I only use one computer at a time so connecting via sshto the machine running my irc client 24/7 is more than enough for me at the moment. But then, the bad news, the machine running my irc client (odin at sdfeu.org) crashed and we were left without the service for an unspecified amount of time.
So I put plan B into practice. Bounce using my raspi, which already hosts my gopher server. In my raspi I only had tmux and weechat already configured, so I didn't spend any time installing and configuring other programs. I directly launched the already existing ones. And wow! what a difference. Now that I'm a bit more into the irc world. I can take advantage of the plugins and scripts that allow you to achieve what you want/need.
One big difference between weechat and irssi is that weechat's scripts and plugins seem to be more integrated (ie. work better) than in irssi. Apart from the fact that weechat has a lot of default options that you can only achieve in irssi installing plugins.
The best plugin, so far, is the aspell one. Once activated, it highlights in red your misspelt words. This way you avoid posting a lot of typos.
The best scripts, so far, are: the buffers.pl, urlbar.py, urlgrab.py, cmus.py, weeget.py, iset.pl and isgd.pl (a url shortening service utility) but there are also a lot of fun and interesting ones, like for example , the games weetris.pl or mastermind.pl. Some other scripts that allow you to manipulate text are, among many others, leet.py, upside_down.py or prism.py
I have played with some others and I will spend the rest of the weekend trying new ones, like for example the beep.pl or launcher.pl ones.
Posted by chals at 10:57 PM